“There’s no crying in baseball!”

I don’t tend to cry.  I mean – give me a sad film, or book and I’m sobbing like nobody’s business.  But in pain, randomly when it’s all just got too much?  Not that often.  (Although let’s take my last year of work out of the equation, because dear god I was a mess.)

But I have cried in my last three appointments, and all three times it was around the same topics.  Frustration at the “system” and exercise.

The last few months have been tough for me.  My condition seems to have gone into haywire, insomnia has struck big time, my pain levels are pretty damn ridonkulous and I’ve been pretty much stuck in the house.  It’s always tough when you have a flare up, because of the fear this is your new reality.  This is the next downward slide, on a slide that’s been pretty slippery for the last eleven years.  At the same time there has to be hope.  Sometimes I pin it on myself – I’m going to try this supplement, and do these new stretches eight times a day until every muscle in my body is strengthened and then…

And then I’m doing the most basic of basic stretches, and put my joint out, and I’m lying on the floor with half my body shaking in spasm, trying not to throw up and thinking if I can just make it back to the sofa and not move for five days, it will be okay.

So then I pin that hope on others.  That I’m going to go to the physio and they’ll give me as much Hydrotherapy as I need, and then I’ll see the pain consultant and they’ll read the research I’ve found around a specific new medication that looks really promising and will give it to me without a fight, and then…

And then I’m sitting with the physiotherapy who is giving me the lecture that they don’t have infinite resources, so I can have one more block of hydrotherapy next year, and then that’s it.  I’ll have to find somewhere else to go, and I’m trying to explain there is nowhere else, nowhere accessible, nowhere affordable, and I’m crying because I just want them to say yes, no problem, for once.

And then I’m at the pain consultant – the one that’s meant to work with people with Ehlers-Danlos Syndrome a lot, except she’s getting the most basic elements of the condition wrong.  She does read the research I push at her, and she turns and says – “Yes, we do this here.”  There’s a pause, my heart races. “But not for people with your condition.”  And then she’s lecturing me – you need to exercise, and push through the pain, it can’t be that bad.  And I’m trying to tell her, explain that I’m not talking about aching muscles the next day after a session at the gym, but agonising and consuming pain, partial dislocations – bedbound for days, and I’m crying because she doesn’t get it.

And then I’m at the osteopath, and she has her elbow in my lumbar spine, and she says, “Have you considered exercise?”  And I sigh internally, but politely try to explain the same old issues, that I do exercise – but it has to be extremely limited, and she’s pushing it and pushing it until the tears are there again and then she’s backpedalling, and sorry.

It’s so frustrating, I hate crying – and on their own are such minor things.  It’s the build up of it all, the feeling they’re just not listening.

But I need to wipe my tears, because it gets me nowhere, and push on with what I can.  I’ll get there.

It’s not that I believe the vast majority of doctors are bad doctors, it’s just that I think many have a specific attitude to healthcare. They want to see a patient, diagnose the problem, hand over a prescription and see them in a few years time for another issue.

However, when someone has a chronic illness – they’re obviously way past that point.  There are no antibiotics for us, no treatment that will make it go away – and I think many doctors find that frustrating.

It takes a special kind of doctor to remain supportive and helpful in the long-term.  To not give up as soon as one medication fails, or a treatment doesn’t work as suspected, or a medication helps one symptom – but creates another which now needs treating.

* A good doctor doesn’t roll their eyes when they ask how they can help, and you pull out a list.  A good doctor realises for a chronically ill patient each symptom is connected, and shouldn’t be restricted into only discussing one problem at a time.

* A good doctor realises every symptom has significance.  For example, the medication I am on for pain relief has unfortunately caused me to have acne.  I find this really difficult, and I don’t want it dismissed as there are more ‘important’ issues.

* A good doctor doesn’t get frustrated when you come in clutching the latest breakthrough study, but reads it and explains whether it’s possible in my case or not.

* A good doctor let’s you cry when it’s all too much, and is thrilled for you when something goes well.

* A good doctor doesn’t dismiss a new symptom as just part of the condition, and carefully checks it first.

My GP is amazing.  She has this special quality about her that you feel she truly cares about all her patients.  She fights for us – will battle the system or a consultant when needed.

A GP to me is more important than a good consultant.  They are really in charge of your care, your medication and the day-to-day stuff of your condition.

Unfortunately, a few months ago my GP informed me she was leaving the practice.  I was, and still am, gutted.

I’ve been with the GP practice my whole life – but since I moved to the other side of town, and since the one GP at the surgery I like will be going, it made sense to move to one closer to home.

My GP highly recommended a specific doctor as best to treat my particular condition, but when I called them the receptionist informed me I was out of their catchment area by a road.  When I told her though, she immediately picked up the phone and said not to worry, they owe her a favour and she’d cash in it.  By the time I got home I’d had a call from their practice manager to say I was welcome to join the surgery.

Today I have my last ever appointment with her.  I’ve got her a thank you gift, but I know there will be more tears!

Edit:  There were tears from both us.

The letter from the Pain Clinic arrived today.  Remember he’d agreed to say I needed massage treatment?  It was the one silver lining of the appointment – so he can’t treat me, but at least I’ll hopefully get some help for massage?

HE DIDN’T WRITE IT.

I then called his secretary, who asked him again about it for me.  He came back (through her) to say he wouldn’t write that.

The day of seeing the Pain Clinic arrives.  I have been researching latest treatments and I find one that seems really promising in terms of pain relief – infusions.  I print off the latest studies to take with me.

I also take a list of medications/treatments tried and my diagnosis list.  My mind usually goes blank when I’m asked, so it’s helpful to have to hand.  My heart sinks a little when he asks about treatments I’ve tried – all the standard alternative and normal – physio/hydro etc and then follows up with ah, that’s a shame, you’ve tried everything I was going to suggest.

I want someone with flare!  Imagination!  Pain is unique and different for everyone, and if you can’t handle someone whose tried acupuncture already and found it unhelpful, then I’m going to struggle with that.  So I bring him back to my main reason for referral – facet joint injections.  My one last remaining hope.

But he, sadly, is not hopeful.  He explains that normally they’d help (normally, normally – I hate that work.  Normally surgery would work, normally treatment would work, but with you…) but because of my condition – my whole spine isn’t being held in place properly.  If he injected the main site of pain, it’s highly likely that immediately the sites above and below would become the problem instead, so I’d want injections there, and then immediately the next sites would go… and so on.

I then ask about the infusions and he tells me they don’t do them there, and even if they did they wouldn’t be likely to do them to people with Ehlers-Danlos Syndrome as there’s so few of us.  Right, so because it’s a highly undiagnosed condition – we deserve to be dismissed.

So my suggested treatment plan is upping my morphine patches until the highest dose possible.  If I’m still in pain, then they’d look at the injections.  Which will likely make me put on more weight.

The patches have added risks of fatigue, and messing with my hormones (i.e. increasing the acne I already have from using the patches.)

I then explain how helpful I find massage, but I’m worrying about how I will afford it when I finish work at the end of March.  He agrees to write in my letter that I need massage as a treatment, which my GP should then be able to set up.

So, it seems this is my life.  Painkillers on top of painkillers. 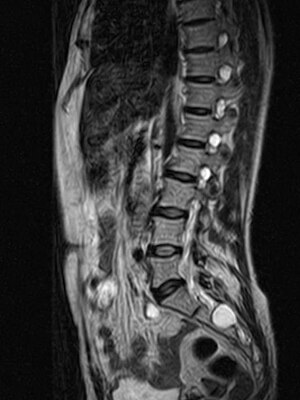 Getting the answers doesn’t always solve everything

For so long now I’ve been trying to get an MRI, after my mobility vastly reduced over the past few years. Luckily my specialist consultant agreed, and asked my GP to get one done locally.

My GP told me it showed a few issues

However, locally – I’m still getting nowhere. My GP referred me to a spinal surgeon to discuss this, but in my area we have a ‘spinal pathway’ – seemingly controlled my physiotherapists. Even having my results upfront, they still want a physiotherapist to carry out a physical assessment, which isn’t going to tell them anything!

After waiting eight weeks for this, I went back to my specialist consultant at the Royal Orthopedic Hospital, who agreed to refer me to a surgeon there, so I can actually discuss my options (if any).

But, it at least explains why I can’t walk far – both the spinal narrowing, and facet cysts would cause this issue and can’t be solved with the hand wave ‘just exercise more’ than doctors love.